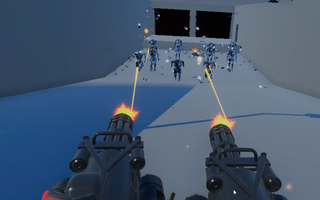 Armed & Loaded is a Virtual Reality Arcade Shooter. Explore & Survive from Horde of Robots!. You're inside a simulation of a simulation with task to invade outisde of Robot Factory before the real event. Player only has 3 HP each round.

☠ Highly inspired by Arcade Rail Shooters such as Terminator ☠

☠ Game will always be FREE ☠

Disclaimer: Armed & Loaded is a School Project just like our other game Attack on Toys. But we don't have any intention to update the game so this game might not get any update in the future.